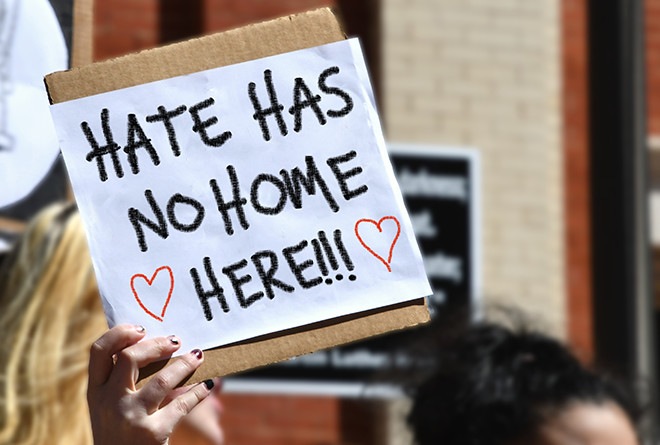 Leader of the ĽSNS party was found guilty by the Supreme Court of the Slovak Republic for committing the crime of "showing sympathy for a movement aimed at suppressing fundamental rights and freedoms" pursuant to the provisions of Section 422 Par. 1 of Act no. 300/2055 Coll. Of the Criminal Code (hereinafter referred to as the “Criminal Code”).

He was to commit the crime by handing out checks in the nominal value of EUR 1,488. -  which he handed out on March 14th, 2017, so on the anniversary of the declaration of the Slovak state, which shows many typical features of a fascist and totalitarian establishment.

In this case, it was supposed to be one of the so-called extremist crimes. In general, extremist crimes can be defined mainly as dangerous, anti-social phenomena, that can lead to social conflicts and political destabilization. They are often associated with racial, ethnic or religious intolerance. The basic types of extremism are: political and religious.

The criminal object of these crimes is in many cases to protect fundamental rights and freedoms, the equality of people regardless of their national, ethnic, racial, religious or other affiliation. Thus, it is a matter of protecting the basic pillar of democracy, which is the equality of people, set in Act no. 460/1992 Coll. The Constitution of the Slovak Republic (hereinafter referred to as the “Constitution of the Slovak Republic”) in Article 12, paragraphs 1 and 2. The crime of expressing sympathy for a movement aimed at suppressing fundamental rights and freedoms, for which the mentioned Member has been convicted, has the same object.

However, one of the conditions for the fulfilment of the factual nature of this criminal offense under the provisions of Section 422 Par. 1 of the Criminal Code consists in publicly expressing sympathy for a movement that is or has been aimed at suppressing the fundamental rights and freedoms of individuals, or that professes racial, ethnic, national, or religious hatred. The way to show sympathy can be, for example, the use of badges, uniforms, flags, slogans or other symbols associated with extremist movements. They may even be symbols that have been directly linked to such movements or groups of people in the past, or combinations of passwords, numbers and letters that do not promote such a movement or group of people per se, but serve as a substitute for them. This represents an objective aspect of this crime.

According to the law enforcement authorities, in this case the number 14, in the amount of EUR 1.488, -, for which the check in question was issued, should have represented the sentence: „We must secure the existence of our people and a future for white children.“ authored by American racist David Lane. The sentence has 14 words and the number 14 is used as a neo-Nazi symbol, often in combination with the number 88, which in Nazi symbolism refers to the Nazi salute "Heil Hitler", as the letter H is the eighth letter in the alphabet.

An expert specializing in neo-Nazism, Ján Uhlíř, agreed with the above, when the number 14 is supposed to represent the above sentence, and at the same time added, that symbols 14 and 88 are one of the most common cryptograms of neo-Nazism.

The Prosecutor of the Office of the Special Prosecutor's Office, Tomáš Honz, also commented on the symbolism of the numbers: “If you want to prove that the numerical symbolism is related to neo-Nazism, you have to prove to the defendant that his motivation is neo-Nazi."

In the case of the examined checks, this public procedure was completed, according to the court, primarily by presenting the distribution of the mentioned checks in the defendant's newspaper "Noviny Ľudovej strany Naše Slovensko " and by a video published on the website.

It is also worth mentioning the statement of the President of the Chamber in justifying the judgment, who said, among other things: "It cannot be overlooked that the handing over of checks with the amount of EUR 1.488,- took place on March 14th, so on the day when the Slovak state, which leaned towards fascist practices, was founded. At that time, Roma, Jews and others were discriminated. It is therefore unbelievable, that only a sum of two Nazi symbols was collected. The defendant must have been aware of these symbols. The defendant publicly presented the numbers associated with Nazi symbolism, thus subscribing to this system.“

Another feature of the merits of this crime is the subject. The perpetrator of this crime can be any criminally liable person for the purposes of criminal law, i.e. in the sense of the theory of criminal law it is a general entity. The circumstances precluding criminal liability are generally as follows:

However, according to the competent court, none of these criminal circumstances was related the defendant.

Every crime must have the character of the subjective side. Intentional fault is required for this criminal offense in accordance with Section 17 of the Criminal Code. The perpetrator's psychological relationship to the facts characterizing the crime results from the fault. Fault in the form of intent consists of two components, namely the intellectual component and the will component. Both of these components must include, on the one hand, a threat or violation of the interests protected by the Criminal Code, so the object of the criminal offense, and on the other hand, the manner of committing the criminal offense and other requirements required by the relevant provision of the Criminal Code.

Also on the basis of the above, the Supreme Court of the Slovak Republic found the defendant guilty of the offense of "sympathy for a movement aimed at suppressing fundamental rights and freedoms" under Section 422 Par. 1 of the Criminal Code. The court summed up his actions as the public use of symbols and slogans of expressions of sympathy for ideologies that are and have in the past led to the suppression of basic human rights and freedoms of persons, while preaching racial, ethnic and religious hatred. At the same time, he emphasized the adequacy of the sentence judgment in the lower limit of six months, both in terms of individual and general crime prevention. Individual prevention means the perpetrator's correction and general prevention can be understood to protect society from the perpetrator. In making its decision, the court also took into account the fact that the defendant had led a properly organized life before committing the crime, which it considered to be an indication of the presumption of its correction and the need to impose an unconditional sentence of imprisonment. For these reasons too, the MP was sentenced to imprisonment with a conditional suspension of his or her probationary period of one year and six months.

The decision of the Supreme Court of the Slovak Republic was valid on the day of its delivery, i.e. April 5th, 2022. From the point of view of the theory of law, validity can be understood on two levels. First, legal validity can be defined from the point in time, at which the judgment becomes unchangeable by a ordinary remedy. The material aspect of validity can be characterized by the legal effects of the binding nature of a final judgment for a defined range of entities to which the decision is addressed.

In conclusion, it should be noted that with the date of validity of the judgment, which was a member of the National Council of the Slovak Republic (hereinafter referred to as "the National Council.") convicted of an intentional crime, the Constitution of the Slovak Republic under Art. 81a lit. f), set automatic termination of a MP´s term of office. As a result, the defendant lost his mandate. A valid judgment for an intentional crime, if the conviction has not been expunged of record, is an obstacle to the right to be elected to the National Council in accordance with Act no. 180/2014 Coll. On the conditions for the exercise of the right to vote and on the amendment of certain laws. With the loss of his mandate, a legally convicted MP also lost income from the National Council. Pursuant to Section 2 Pr. 1 of Act No. 120/1993 Coll. On the salaries of certain constitutional officials, a member of the National Council is entitled to a salary in the amount of three times the average nominal monthly salary of an employee in the Slovak economy for the previous calendar year reduced according to section 2, rounded up to the nearest euro. In the calendar year 2021, the deputy's salary was set at EUR 3,060. - per month. Other consequences associated with the loss of the mandate of a member of the National Council are the loss of the right of legislative initiative, the right of interpellation and the right to ask questions to members of the Government, the right to request information from state authorities for their work, and vote on them on all issues under discussion.

Act No. 180/2014 Coll. On the conditions for exercising the right to vote and amending certain laws, combines a valid conviction for an intentional criminal offense with an obstacle to the right to be elected, in particular, as a Member of the European Parliament, a Member of a self-governing regional council or a Member of a municipal council.